Projects of the Fund

The Centenary of G.S. Ulanova 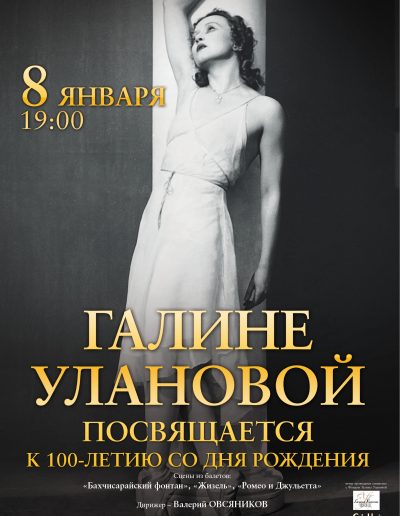 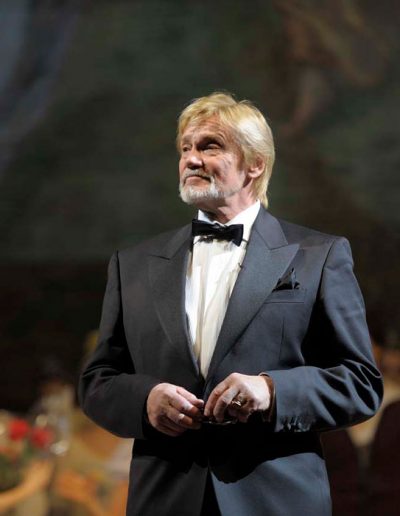 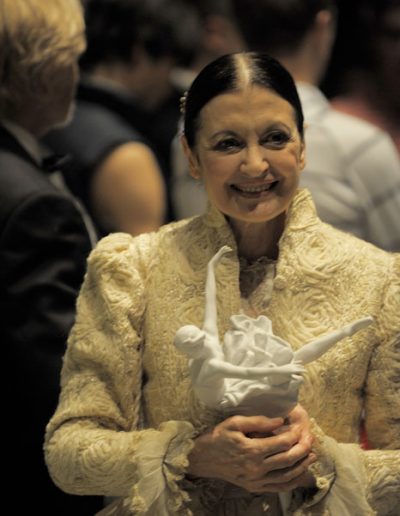 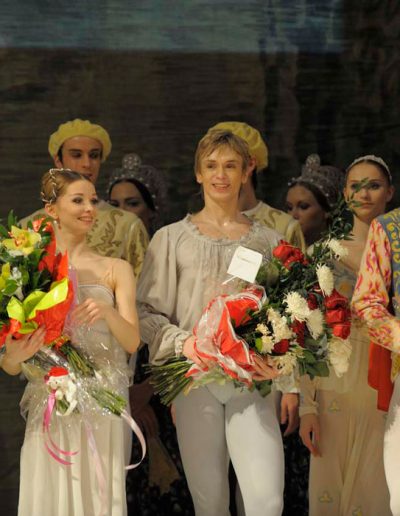 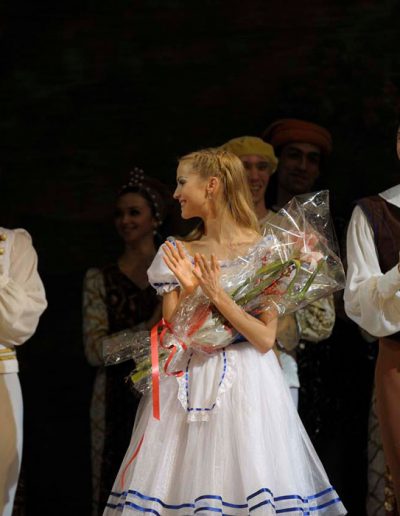 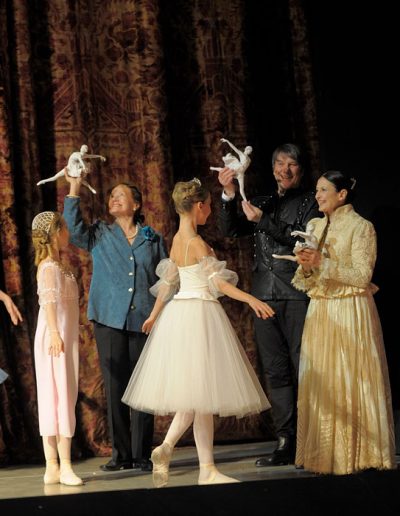 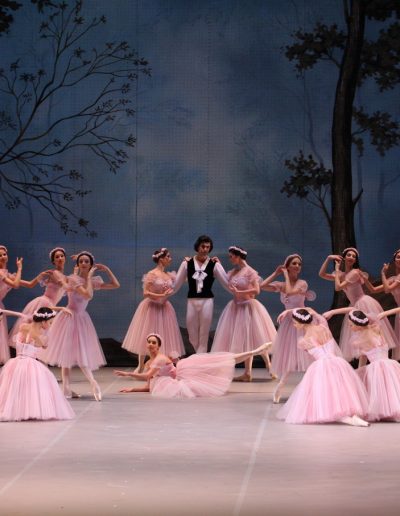 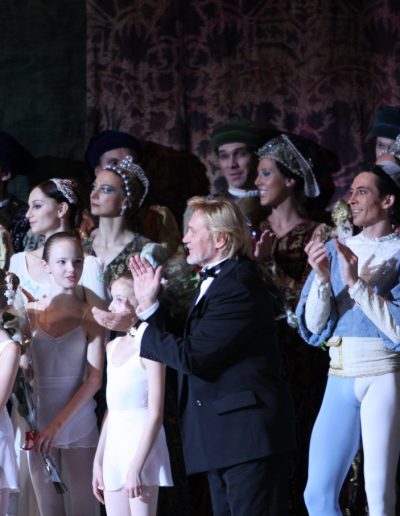 Galina Ulanova’s Foundation started preparing her jubilee events long before the century. The President of the Galina Ulanova Foundation, People’s Artist of the USSR, V.V. Vasiliev, appealed to various higher governing bodies of our country with a request to erect a monument to G.S. Ulanova in Moscow and St. Petersburg by E.A. Yanson-Manizer (there is such a monument in Stockholm, but not in Russia), to name it a street, a square in Moscow and St. Petersburg, an airliner or a sea liner, etc., as well as to create the World Dance Center. Unfortunately, everything promised during personal meetings and appeals has not been realized so far.

The Foundation has also been looking for funds to hold events for the 100th anniversary of the great ballerina. The Russian Ministry of Culture and Gazprombank agreed to provide support. And already in the autumn of 2009, the Galina Ulanova Foundation organized and conducted a tour of the Bolshoi Theater ballet dancers across Siberia with the gala concert “Mona Lisa of the Russian Ballet. It is dedicated to Galina Ulanova”. The concerts were held in Krasnoyarsk, Abakan and also at the Sayano-Shushenskaya hydroelectric power plant. In Abakan it turned out that the Bolshoi Ballet dancers performed in Khakassia for the first time since it joined Russia. And at the Sayano-Shushenskaya hydroelectric power station, the gala concert was a charity event for the employees of the hydroelectric power station and their families who suffered after the tragedy with the accident at the station.

Alicia Alonso (the award was given to her later in Havana).

Mikael Denar came to receive the award and give it to Yvette Chauvir in Paris.

On 16 January 2010, the Galina Ulanova Foundation organized a gala evening “Mona Lisa of the Russian Ballet. Galina Ulanova is Dedicated” at the Bolshoi Theatre in Moscow (on the New Stage, as the building was under reconstruction).

From May 17 for two months in St. Petersburg State Museum of Theatre and Music Art with the support and in cooperation with the Galina Ulanova Foundation was organized and held an exhibition dedicated to the life and work of G.S.Ulanova.

The Foundation also released a colourful album with fragments from Ulanova’s diary and her photographs and presented them to viewers at the Mariinsky and Bolshoi Theatres. 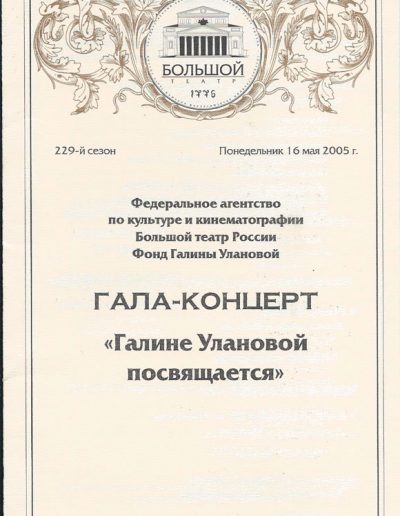 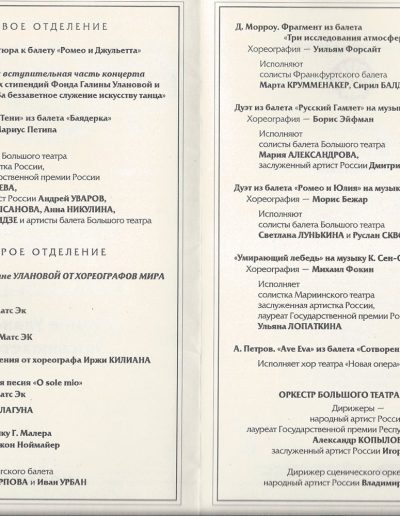 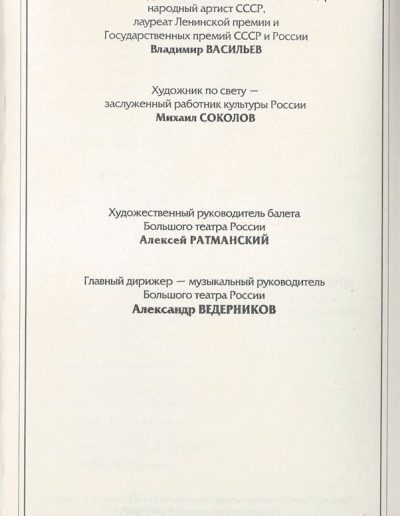 The second gala concert, organized by the Foundatio,  Bolshoi and the Mariinsky Theatres, was the evening of Galina Ulanova on 16 May 2005 at the Historical Stage of the Bolshoi Theatre. It was a concert-dedication from two great opera and ballet theatres of Russia, and also a dedication from famous contemporary choreographers: M. Bezhara, I. Kilian, J. Neumeier, W. Forsythe, B. Eifman and M. Eck, who himself came to this gala concert and performed in his miniature together with his wife and ballerina A. Laguna.

President of the Galina Ulanova Foundation, People’s Artist of the USSR V.V.Vasiliev opened the evening and awarded personal scholarships of the Foundation to the following students of choreographic schools:

The President of the Foundation also presented an award “For selfless service to the art of dance”.

Yvette Chauviré (the award was presented later in Paris), the world-famous choreographers Maurice Béjart and John Neumeier, the ballet dancer of the Paris Opera, Eva Evdokimova, and the Bolshoi Theatre conductor Alexander Kopylov.

President of the Galina Ulanova Foundation, People’s Artist of the USSR V.V. Vasilyev opened the gala concert with the words that the day of May 16th was marked by the opening of the gala. S, Ulanova all her life celebrated as her second birthday. It was the day of her graduation from choreography school. That is why the Foundation decided to hold this gala concert dedicated to her on May 16.

In 2004, at the request and suggestion of the Galina Ulanova Foundation, the Lomonosov Porcelain Factory in St. Petersburg, a department of the State Hermitage Museum, for the first time in 40 years revived the porcelain statue of G. S. Ulanova as Odette by E. A. Yanson-Manizer. The Foundation established an award “For selfless service to the art of dance” in the form of this porcelain statuette. At this gala concert, the award was presented to great names of Soviet and Russian ballet:

The first gala concert “Galina Ulanova is dedicated” was held by the Galina Ulanova Foundation on March 21, 2003 on the day of the 5th anniversary of G.S.Ulanova’s death in the New Opera Theatre.

The Foundation also addressed the world’s theatres with an appeal to remember the great ballerina G.S. Ulanova on March 21, dedicating one of her performances to her. Many theatres in Russia and abroad responded and joined this action in memory of G.S.Ulanova.